Goodbye to the Dead (A Jonathan Stride Novel #7) (Paperback) 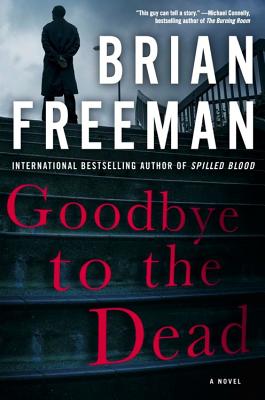 By Brian Freeman
Email or call for price
Out of Print

This is book number 7 in the A Jonathan Stride Novel series.

Detective Jonathan Stride's first wife, Cindy, died of cancer eight years ago, but her ghost hangs over Stride's relationship with current lover, and fellow detective, Serena Dial. When Serena witnesses a brutal murder outside a Duluth bar, she stumbles onto a case with roots that go all the way back to the last year of Cindy Stride's life.
At the time, Cindy and Stride were on opposite sides of a domestic murder investigation. Gorgeous, brilliant Janine Snow--a surgeon transplanted to Duluth from Texas--was the prime suspect in the shooting death of her husband. Cindy believed her friend Janine was innocent, but Stride thought all the evidence pointed to the surgeon--even though the gun was never found. Despite Cindy's attempts to help Janine, the case led to a high-profile murder trial in which Janine was convicted and sent to prison.
During the current investigation, Serena finds a gun used in the murder of a woman connected to an organized crime syndicate--a gun that turns out to be the same weapon used to kill Janine Snow's husband. Two unrelated cases years apart suddenly have a mysterious connection. As Stride investigates the possibility that human traffickers are targeting women in the Duluth port, he begins to question whether he made a terrible mistake eight years ago by putting an innocent woman in prison. And whether he will ever be able to make peace with the memory of his beloved wife and give his heart to Serena.

A native of Chicago and longtime resident of the Twin Cities, Brian Freeman is an international bestselling author of psychological suspense novels. His books have been sold in 46 countries and 20 languages and have appeared as Main Selections in the Literary Guild and the Book of the Month Club. He is the author of The Cold Nowhere, and Spilled Blood--which was the recipient of the Best Hardcover Novel in the annual Thriller Awards presented by the International Thriller Writers organization. The Burying Place was a finalist for the same award. The Bone House was a finalist for Best Audiobook of the Year in Thriller/Suspense. Brian's debut thriller, Immoral, won the Macavity Award and was a nominee for the Edgar, Dagger, Anthony, and Barry awards for best first novel. Freeman lives in St. Paul, Minnesota, with his wife, Marcia.

A Booklist Best Mystery of 2016 Selection

"Goodbye to the Dead is a superior psychological thriller that adroitly weaves obsession, sex and revenge into a page-turning mystery. At the end there is the Freeman hallmark: a shocker of a plot twist that turns everything that's gone before upside down."— Open Letters Monthly

"Freeman skillfully weaves together diverse story lines, from the old murder to a sex-slavery operation, with twists that build suspense, in this fine, character-driven addition to a strong series."
—Booklist (Starred Review)


"If you're looking for a full docket, Freeman pays off in spades."—Kirkus Reviews

"This is by far the best book in this terrific series and I cannot wait to see where we go next with Stride, Serena, and Maggie."—Dru's Book Musings

"Deftly plotted seventh Jonathan Stride novel... Stride's heartfelt memories of [his deceased wife] and his reluctance to to fully commit to [his girlfriend], coupled with an in-depth look at the book's supporting characters, make this police procedural a standout."—Publishers Weekly (Starred Review)

"Readers are still discovering Brian Freeman and Jonathan Stride. One can read Goodbye to the Dead without knowing what has gone before, but be assured that you will want to clear a space on your bookshelf for the other volumes."—Bookreporter

"A twist-filled psychological suspense novel exploring the nature of good, evil, duplicity, obsession, love and the power of past decisions."
—Huffington Post


"Master storyteller Brian Freeman knocks it out of the park with his latest Jonathan Stride crime thriller. . .hugely addictive. . .This compelling police crime thriller should be on everyone's must-read list."
—Fresh Fiction


"This incredible author is perfect when giving clarity to both past and present. If there is a way to say 'higher' than 'highly recommended,' I wish I knew it. Because this is one of those thrillers that go above and beyond."
—Suspense Magazine


"[Stride is] in the compnay of Bosch, Thorne, Tennison and Skinner, some of my other favorite detectives time has not mellowed."
—Minneapolis Star Tribune


"Right up there with [Freeman's] best . . . Goodbye to the Dead is a superior psychological thriller that adroitly weaves obsession, sex, and revenge into a page-turning mystery."
—Open Letters Monthly


"Goodbye to the Dead delivers page-turning surprises and action . . . another winner from an author who, 10 years later, just keeps getting better and just keeps mastering and perfecting the art of the psychological thriller."
—Duluth News Tribune


"Filled with suspense and a powerful ending, Goodbye to the Dead is a summer must-read."
—Michigan Home Magazine