Walking Each Other Home: Conversations on Loving and Dying (Paperback) 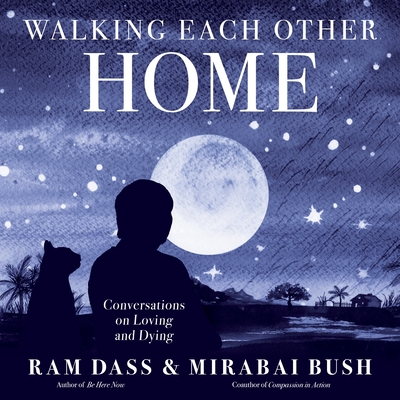 An intimate dialogue between two friends and luminaries on love, death, and the spiritual path, with guidance for the end-of-life journey

We all sit on the edge of a mystery. We have only known this life, so dying scares us—and we are all dying. But what if dying is perfectly safe? What would it look like if you could approach dying with curiosity and love, in service of other beings? What if dying is the ultimate spiritual practice?

Ram Dass and Mirabai Bush began their friendship more than four decades ago at the foot of their guru, Neem Karoli Baba, also known as Maharaj-ji. He transmitted to them a simple philosophy: love everyone, tell the truth, and give up attachment to material things. A year before Ram Dass passed, he reunited with Bush for an intimate dialogue—which became Walking Each Other Home.

In this extraordinary book, you’ll hear from two beloved teachers about the spiritual opportunities within the dying process. They generously share intimate personal experiences and timeless practices with courage, humor, and heart, gently exploring every aspect of this journey. Here you’ll learn about guidelines for being a “loving rock” for the dying, how to grieve fully and authentically, how to transform a fear of death, leaving a spiritual legacy, creating a sacred space for dying, and much more.

“Everybody you have ever loved is a part of the fabric of your being now,” says Ram Dass. The body may die, but the soul remains. Death is an invitation to a new kind of relationship, in the place where we are all One. Join these two lifelong friends and spiritual luminaries as they explore what it means to live and die consciously, remember who we really are, and illuminate the path we walk together.

Ram Dass (1931–2019) first went to India in 1967. He was still Dr. Richard Alpert, an already eminent Harvard psychologist and psychedelic pioneer with Dr. Timothy Leary. He continued his psychedelic research until his journey to the East in 1967, driving overland to India, where he met his guru, Neem Karoli Baba, affectionately known as Maharaj-ji. Maharaj-ji gave him the name, Ram Dass, which means "servant of God." Everything changed then—his intense dharmic life started, and he became a pivotal influence on a culture that has reverberated with the words “be here now” ever since.


Be Here Now, Ram Dass's monumentally influential and seminal book, still stands as the highly readable centerpiece of the Western articulation of Eastern philosophy and practicing to live joyously in the present moment, be it luminous or mundane. From a backpackers’ bible in the 1970s, Be Here Now continues to be the instruction manual of choice for generations of spiritual seekers. Fifty years later, it's still part of the timeless present. Being here now is still being here now. Ram Dass's work continues to be a path of teaching and inspiration to so many. His loving spirit has been a guiding light for three generations, carrying millions along on the journey, helping free them from their bonds as he has worked through his own. For more about Ram Dass’s teachings, visit ramdass.org.

Mirabai Bush teaches practices and develops programs through the application of contemplative principles and values to organizational life. She is a cofounder of the Center for Contemplative Mind in Society, founding board member of the Seva Foundation, and coauthor (with Ram Dass) of Compassion in Action. She lives in Massachusetts. More at mirabaibush.com.