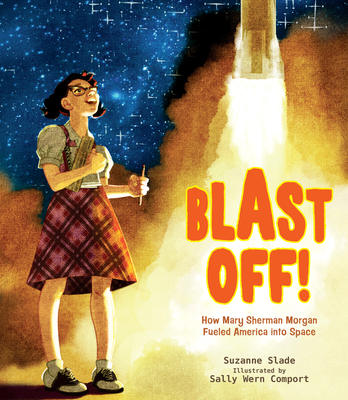 The inspirational story of Mary Sherman, the world's first female rocket scientist, who overcame gender barriers and many failures to succeed.

Growing up in the 1920s on a dirt-poor farm in North Dakota, Mary Sherman's life was filled with chores--until she finally began school and discovered she loved to learn.

Mary excelled at science, especially chemistry, and leaped at the chance to work in a laboratory during World War II designing rocket fuels. And when the US decided to enter the space race, Mary was chosen over her male colleagues to create the fuel to launch a rocket carrying America's first satellite.

With courage and perseverance, Mary's hard work and calculations paid off, opening up a brand-new frontier for exploration. This STEM biography of an unsung and courageous woman in science will inspire and motivate young readers.

Suzanne Slade is the award-winning author of over 140 children's books. An engineer by degree, she enjoys writing on STEM topics, as well as inspiring figures in history. She lives in Libertyville, Illinois. Visit suzanneslade.com.

Sally Wern Comport has been a working artist since her teenage years as an on-staff artist for her father's advertising agency. She has illustrated numerous picture books and covers. She lives in Annapoiis, Maryland. Visit sallycomport.com

"Slade...follows noted chemist Morgan from her North Dakota childhood working on the family farm to the triumph of watching the rocket that launched the U.S.’s first satellite into Earth’s orbit—using fuel she developed—with many obstacles and challenges along the way. Comport’s...illustrations...are effective in showing the discrimination Morgan faced as a young female chemist in the 1940s, her isolation surrounded by men, and the wonderment of her accomplishments....An engaging introduction to one woman’s mostly unheralded contributions to American space flight." —The Horn Book

"[Suzanne Slade]...profiles another woman scientist who played a significant role in this country’s early space program...Slade follows Mary Sherman Morgan from a North Dakota farm to a lab in California, where her 'passion for chemistry' drove her to become 'the rocket fuel expert,' and to develop the powerful-yet-stable fuel that put Explorer I into orbit in 1958. Comport outfits Morgan in nerdy period eyeglasses, standing confidently next to the tools of her profession amid swirls of equations." —Booklist