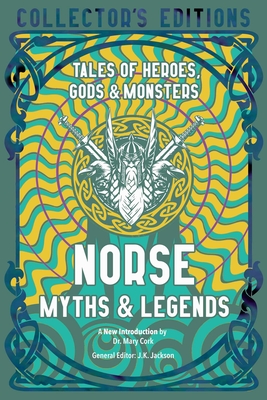 Beautiful edition with a new introduction to the origins of Thor and Loki, Odin and Freya, the gods and giants of the Vikings, highlighting the origins of modern fiction in myth and fable.

Gorgeous Collector's Edition. From the legends of Odin, Thor, Loki, Freya and all the gods of Asgard come the 'The Treasure of the Dwarf King', 'Ragnarok' and many other thrilling tales of the Vikings and their Norse gods fighting a constant battle with nature. Their landscape, with its stark mountains and long nights, created a particularly robust mythology, with profound contrasts and unforgettable heroes, great gods who leap out from the movies, streaming services and comics, to great fiction and epic poetry. This fabulous new book offers all the main stories with an introduction to the characters and the land that inspired them.

Dr Luke John Murphy is a researcher who works with pre-Christian religions. His publications and teaching cover Nordic mythology, early British religions, temples and objects, and the role of religion in past societies. He has held research posts at the University of Iceland, University of Leicester, Stockholm University and Aarhus University.