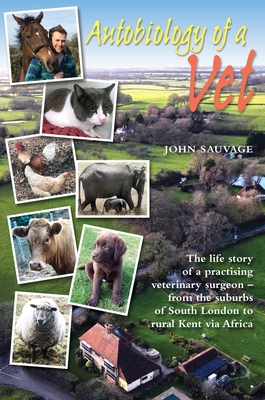 Opening with his award of Membership of the Royal College of Veterinary Surgeons, the book relates John's personal and family history from his English and Belgian parents and grandparents and their roles in two World Wars. His Belgian grandparents were evacuated to England in the first war: his father was shot at by the Germans during the liberation of Antwerp and his mother bombed in a pub in South London while serving in the London Auxiliary Ambulance Service in the second.

Managing to get into veterinary college from a large comprehensive school in South London, John recounts tales from his studies and goes on to discuss various major debates which occurred during his career, including vaccinations and the anti-vaccine lobby. The role of badgers and TB is also discussed. The tale of his experience of meeting children with the drug-induced injury of thalidomide is both life-affirming and tear-jerking.

His time in East Africa, including his experiences in Uganda under Idi Amin's dictatorship, is chilling but still funny and up-lifting. The tales of his experiences in general and specialist veterinary practice, with memorable farm, horse, dog and cat cases are enlightening, educational and sometimes sad but often very hilarious. The horrific experiences with foot-and-mouth disease will get any animal lover in tears and questioning what happened and why? But the option of a Vegan Utopia in a world without farm animals is dismissed as a sad alternative as demonstrated when large swathes of the United Kingdom were left without stock after the outbreak.