The Woman in the Woods and Other North American Stories (Paperback) 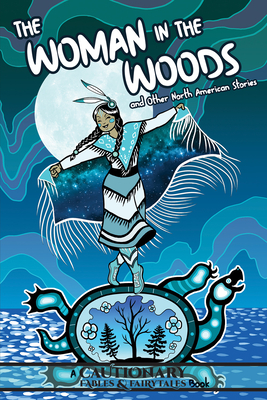 "Enjoyable for reading aloud or sharing around a campfire." -- KIRKUS

"Be careful of what you accept from spirits."

Loup Garrou, trickster rabbits, and spirits with names that can't be spoken -- the plains and forests of North America are alive with characters like these, all waiting to meet you in this collection of folklore retold in comics

This fifth volume of the "Cautionary Fables and Fairytales" anthology series features updated takes on ancient stories from tribes spanning the continent, bursting with bedside tales that are thrilling, chilling, and most of all inspiring. Featuring the work of JORDAAN ARLEDGE, MAIJA AMBROSE PLAMONDON, MILO APPLEJOHN, and more

Kate Ashwin has drawn and written over 1000 pages of webcomics since 2002, her most current project being the well-received Victorian-era adventure story Widdershins, which is currently on its sixth Kickstarter-funded volume. Kate has also contributed to, co-edited, and provided Kickstarter support to the "Cautionary Fables and Fairytales" books, written a story for Dark Horse Presents, and contributed artwork to critically-acclaimed kid's weekly comic The Phoenix. Kel McDonald has been working in comics for over a decade--most of that time has been spent on their webcomic Sorcery 101. More recently, they have organized the Cautionary Fables and Fairytales anthology series while contributing to other anthologies like Dark Horse Presents, Smut Peddler, and Sleep of Reason. They've also worked on Buffy: The High School Years and recently finished a creator-owned series, Misfits of Avalon, and the Eisner-nominated Stone King. Kel is currently working on the self-published series, The City Between. Their work can be found at kelmcdonald.com. Alina Pete is a Cree artist and writer from Little Pine First Nation in western Saskatchewan. They are best known for their Aurora award-winning webcomic, Weregeek (weregeek.com), and for their Shuster-nominated anthology, Life Finds a Way. Alina also writes short stories, poems, and RPG supplements, and their work has been featured in several comic anthologies, including Moonshot Volumes 2 and 3.