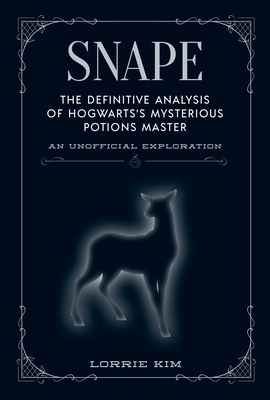 This fully revised and expanded edition of Lorrie Kim's classic work digs deep into the life and legend of Severus Snape, fan-favorite of the Harry Potter series

While the Harry Potter series may follow the journey of the Boy Who Lived, if you want to know the whole story, keep your eyes fixed on Severus Snape. This greasy-haired, grumpy genius, one of J.K. Rowling’s most enduring gifts to English literature, is the archetypal ill-tempered teacher: demanding, acerbic, and impossible to ignore. Over the span of seven novels, Snape’s remarkable role in the series can be hard to parse: Where do his true allegiances lie? Can a former Death Eater change his spots? Why does he seem to loathe the boy he’s pledged to protect?

Taking an analytical approach to Hogwarts’s irascible, protective Potions professor, author Lorrie Kim presents a closer look at how Dumbledore’s double agent operates behind the scenes throughout the Harry Potter series. By examining the story from Snape’s point of view, this in-depth exploration pierces the defenses of the wizarding world’s famed Occlumens, revealing the man for who he truly is: one of pop culture’s most memorable heroes.

Lorrie Kim lives in Philadelphia, PA with her clever, grumpy, magical spouse and their Harry Potter-reading offspring, one born between Order of the Phoenix and Half-Blood Prince and one in gestation during the publication of Deathly Hallows.