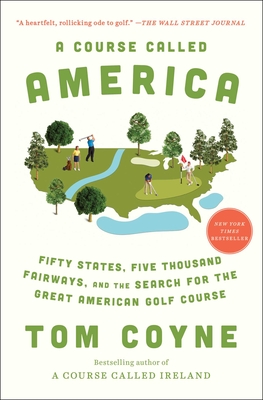 Globe-trotting golfer Tom Coyne has finally come home. And he’s ready to play all of it.

After playing hundreds of courses overseas in the birthplace of golf,​ Coyne, the bestselling author of A Course Called Ireland and A Course Called Scotland, returns to his own birthplace and delivers a “heartfelt, rollicking ode to golf…[as he] describes playing golf in every state of the union, including Alaska: 295 courses, 5,182 holes, 1.7 million total yards” (The Wall Street Journal).

In the span of one unforgettable year, Coyne crisscrosses the country in search of its greatest golf experience, playing every course to ever host a US Open, along with more than two hundred hidden gems and heavyweights, visiting all fifty states to find a better understanding of his home country and countrymen.

Coyne’s journey begins where the US Open and US Amateur got their start, historic Newport Country Club in Rhode Island. As he travels from the oldest and most elite of links to the newest and most democratic, Coyne finagles his way onto coveted first tees (Shinnecock, Oakmont, Chicago GC) between rounds at off-the-map revelations, like ranch golf in Eastern Oregon and homemade golf in the Navajo Nation. He marvels at the golf miracle hidden in the sand hills of Nebraska and plays an unforgettable midnight game under bright sunshine on the summer solstice in Fairbanks, Alaska.

More than just a tour of the best golf the United States has to offer, Coyne’s quest connects him with hundreds of American golfers, each from a different background but all with one thing in common: pride in welcoming Coyne to their course. Trading stories and swing tips with caddies, pros, and golf buddies for the day, Coyne adopts the wisdom of one of his hosts in Minnesota: the best courses are the ones you play with the best people.

But, in the end, only one stop on Coyne’s journey can be ranked the Great American Golf Course. Throughout his travels, he invites golfers to debate and help shape his criteria for judging the quintessential American course. Should it be charmingly traditional or daringly experimental? An architectural showpiece or a natural wonder? Countless conversations and gut instinct lead him to seek out a course that feels bold and idealistic, welcoming yet imperfect, with a little revolutionary spirit and a damn good hot dog at the turn. He discovers his long-awaited answer in the most unlikely of places.

Packed with fascinating tales from American golf history, comic road misadventures, illuminating insights into course design, and many a memorable round with local golfers and celebrity guests alike, A Course Called America is “a delightful, entertaining book even nongolfers can enjoy” (Kirkus Reviews).

Tom Coyne is the author of the New York Times bestsellers A Course Called Ireland and A Course Called Scotland; Paper Tiger; and the novel A Gentleman’s Game, named one of the best 25 sports books of all time by The Philadelphia Daily News and adapted into a motion picture starring Gary Sinise. He is podcast host and senior editor for The Golfer’s Journal, and has written for GOLF Magazine, Golfweek, Sports Illustrated, The New York Times, and numerous other publications. He earned an MFA in fiction writing from the University of Notre Dame, where he won the William Mitchell Award for distinguished achievement. He lives outside Philadelphia with his wife and two daughters.

“A heartfelt, rollicking ode to golf . . . Coyne describes playing golf in every state of the union, including Alaska: 295 courses, 5,182 holes, 1.7 million total yards. Along the way, he dives deep into the essence of the game—its joys, its agonies and addictions, its hold on golfers’ souls. But most of what you’ll remember after putting the book down are the people he encounters, in all their great American diversity and passion.”
—John Paul Newport, The Wall Street Journal

“A Course Called America is an unequivocal pleasure. Tom Coyne gives a fresh perspective on many places I've been, and I had to pause a number of times to relish the way he reflects on what he encounters—the people, the history, and the humor. Here is a soulful and thoroughly entertaining journey that will give people a sense of what golf means to so many of our friends who love the game.”
—Ben Crenshaw, two-time Masters Champion

“A Course Called America is a discovery of our country, our culture, our people and the diverse ways we come to the game of golf. As a golf course architect, I thought I would love the descriptions of the courses he discovered, and looked forward to finding out which would be crowned the Great American Golf Course. I quickly realized that the stars of this book are not the courses, but the people playing them. I became enthralled with the varied experiences of golf, the camaraderie, the matches.  Tom Coyne is a wonderful storyteller, and the stories that unfold across this vast landscape called America—some laugh out loud funny, and some stirringly poignant—get to the soul of our game and the heart of our nation.”
—Gil Hanse, renowned golf course architect

“As Tom uses his gift for storytelling to chronicle his journey through some of America’s best golf courses, you’ll find yourself remembering why you first fell in love with the game. A Course Called America is a beautifully woven together story that is somehow hilarious and moving all at once, and paints a vivid picture of all that golf in America has to offer.”
—Stacy Lewis, two-time major champion

“This book is one for the ages . . . May be the best of [Coyne’s books] . . . While Coyne searches for the perfect American golf course, what he actually discovers is how golf can build a bridge of harmony between people of different races, religions, and cultures.”
—Les Schupak, The Met Golfer

"Besides oozing with rich golf history and lore, Coyne’s heartfelt anecdotes about people he meets and the joys of companionship are appealing. . . . This is a delightful, entertaining book even nongolfers can enjoy."
—Kirkus Reviews

“An entertaining blend of travelogue, memoir, and sports writing . . . Golf nuts will be tantalized by the glimpses of America’s premier courses, while those looking to book an epic post-pandemic golf trip will find plenty of inspiration.”
—Publishers Weekly

PRAISE FOR A COURSE CALLED SCOTLAND:

“One of the best golf books this century.”
—Golf Digest

“Tom Coyne has a knack for setting impossible tasks for himself. . . . Mr. Coyne is back at it again with A Course Called Scotland. This time he avails himself of cars, planes, and ferries, but the task he sets is no less preposterous: to play 107 courses in 56 days. . . . Readers who enjoyed Mr. Coyne’s rollicking Irish book will be interested to learn how their fearless travel guide has fared in the intervening years. . . . There’s no less wit in the writing—British weather forecasts, he concludes, are ‘as useful as ashtrays on motorbikes’—and almost as many well-rendered characters, both locals he meets and friends and readers who join him along the way. . . . All the famous courses are here: St. Andrews, Dornoch, Turnberry, Carnoustie. But even seasoned golf travelers will be unfamiliar with many of the courses Mr. Coyne finds. He tees it up where nature carved holes that no architect would dream of, where 12 holes instead of 18 suit the members just fine, and where munching sheep, not mowers, keep the fairway grass short. Does he discover the secret to the game? He finds several, including, most practically, ‘never, ever give up.’ ”
—John Paul Newport, The Wall Street Journal

“They said it couldn’t be done—that he’d never be able to top Ireland. But with Scotland, he did it. Damn you, Tom Coyne!”
—Michael Bamberger, author of Men in Green

“A fast-moving, insightful, often funny travelogue encompassing the width of much of the British Isles . . . One of the reasons A Course Called Scotland works so well is because Coyne extended an offhanded invitation to listeners of a radio show to join him in Scotland. . . . The eclectic cast of characters who pop up throughout the story underscore the deep connections forged through travel.”
—Golfweek

“Coyne has a wonderful way of making the reader feel a part of the quest. You experience his trials and tribulations as well as the sense of wonder and awe that comes with playing golf in Scotland.”
—Chicago Tribune

“There is a purity in the Scots’ game that isn’t about manicured greens or a ball’s ‘spin rate.’ Coyne admires their ‘homemade’ swings that merely focus on getting the golf ball around the course and in the hole. He becomes convinced that perfection is an illusion, though a powerful one. He slowly accepts his limitations, one day at a time, swing after swing.”
—Bloomberg

“Tom Coyne’s much-anticipated follow-up to his fun book A Course Called Ireland lived up to my high expectations. Who wouldn’t be jealous of Coyne’s adventures getting to play every links in Scotland? He mixes well his commentary on the courses with the historical significance of each place he visits. This is a must-read.”
—Golf Advisor

“The author entertains us with accounts of foul weather, fair friends (one of whom got hit in the face with a drive), and astonishing courses, some dating back centuries. . . . Golfers and golf-o-philes will gobble this down.”
—Kirkus Reviews

“In this witty and charming follow-up to A Course Called Ireland, Coyne continues living a golfer’s dream by playing every links course in Scotland, golf’s birthplace. . . . Enthusiasts will revel in Coyne’s eloquent narration of his course-by-course adventures, while casual fans might be tempted to pick up their clubs a little more often.”
—Publishers Weekly

“Fighting through physical exhaustion, self-doubt, homesickness and spates of nasty weather, Coyne knocks out 111 full or partial rounds on 107 courses, sometimes three rounds a day, in his search for the ‘secret’ of great golf. It’s no secret that his passion for the game (and life) shows through on every page, and we get to follow his every step through modern golf’s birthplace.”
—Golf Tips Magazine

“News of a new tale by Tom Coyne is always reason to celebrate—assuming you love golf, irresistible storytelling, a cast of colorful characters and a poignant journey through the birthplace of the game. Lots of us share Tom’s Mitty-dream of running away to the great links lands and the lesser known coastal gems of Scotland. But he’s masterfully accomplished the feat with his charming pilgrimage around the game’s Holy Land that unfolds as smoothly as a fine single malt. Coyne's trademark wit, humor, unerring ear for the locals, and deep knowledge of the game are on full display, rendering this a poetic journey you won’t soon forget.”
—James Dodson, author of Final Rounds