Down and Out in Paradise: The Life of Anthony Bourdain (Hardcover) 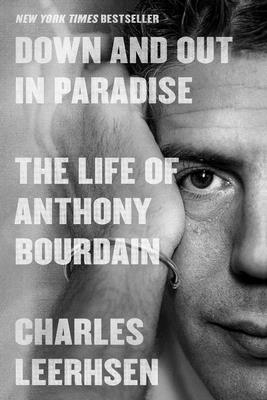 The bestselling, “unvarnished” (The New York Times), “engrossing” (The Guardian), “gritty, well-researched” (The Economist)—and definitely unauthorized—biography of the celebrity chef and TV star Anthony Bourdain, based on extensive interviews with those who knew the real story.

Anthony Bourdain’s death by suicide in June 2018 shocked people around the world. Bourdain seemed to have it all: an irresistible personality, a dream job, a beautiful family, and international fame. The reality, though, was more complicated than it seemed.

Bourdain became a celebrity with his bestselling book Kitchen Confidential. He parlayed it into a series of hit television shows, including the Food Channel’s Anthony Bourdain: No Reservations and CNN’s Parts Unknown. But his bad boy charisma belied a troubled spirit. Addiction and an obsession with perfection and personal integrity ruined two marriages and turned him into a boss from hell, even as millions of fans became enamored of the quick-witted and genuinely empathetic traveler they saw on TV. At the height of his success Bourdain was already running out of steam, physically and emotionally, when he fell hard for an Italian actress who could be even colder to him than he sometimes was to others, and who effectively drove a wedge between him and his young daughter.

Down and Out in Paradise is the first book to tell the full Bourdain story, and to show how Bourdain’s never-before-reported childhood traumas fueled both the creativity and insecurities that would lead him to a place of despair. “Filled with fresh, intimate details” (The New York Times), this is the real story behind an extraordinary life.

Charles Leerhsen is a former executive editor at Sports Illustrated. He has written for Rolling Stone, Esquire, and The New York Times. His books include Ty Cobb: A Terrible Beauty; Crazy Good: The Story of Dan Patch, the Most Famous Horse in America; Blood and Smoke: A True Tale of Mystery, Mayhem, and the Birth of the Indy 500; and Butch Cassidy: The True Story of an American Outlaw. He lives in Brooklyn with his wife, Sarah Saffian. Visit him at Leerhsen.com.

"An unvarnished account of a turbulent life. . . . Grittier than anything we've read about him before. . . . [Leerhsen] is not here, though, to discredit or dismiss his subject. His admiration for Bourdain is nearly always apparent. . . .[Bourdain] would have admired the author’s guts."
— Dwight Garner

"This isn’t an official Bourdain product or a hagiography. . . . This one is thoroughly researched and painstakingly detailed."
— Kara Baskin

"Seeing what the chef, writer and TV host saw on his last day alive in 2018 is only part of Leerhsen’s exhaustive research for the book. . . . The impressionistic portrait that emerges is of a complex man who combined swagger and spiky cool with deep insecurity, neediness and image-consciousness. . . . [An] unvarnished biography."
— Mark Kennedy

“Filled with fresh, intimate details, including raw, anguished texts from the days before Mr. Bourdain’s death. . . . Drawing on more than 80 interviews, and files, texts and emails from Mr. Bourdain’s phone and laptop, the journalist Charles Leerhsen traces Mr. Bourdain’s metamorphosis from a sullen teenager in a New Jersey suburb . . . [to] a uniquely talented interpreter of the world through his travels.”
— Kim Severson

“Peels back the veneer of the Bourdain brand. . . . Leerhsen shares salacious details, but with an air of respect toward his much-beloved subject. . . . Bourdain’s life reads like a cautionary tale of a man who wished for something—and got it. . . . The world is better for his work, but at such a devastating price."
— Booklist

"With zesty verve and material from more than 80 interviews, the author dramatically unfolds an entertaining, ultimately tragic tale. . . A chatty, quick-witted portrait of a complicated, tormented man."
— Kirkus Reviews

"[A] well-researched, thoughtful examination of the late Bourdain. . . .  Leerhsen’s page-turner provides a well-rounded portrait of Bourdain, acknowledging his many faults as well as his empathy, work ethic, and creativity."
— Library Journal

"A three-dimensional view of a man who cultivated authenticity while he was alive, relayed with similarly frank humor."
— Publishers Weekly

"Since Anthony Bourdain’s death in 2018, there have been a handful of books by and about him. . . . But there has yet to be a true biography of the late chef. The first one, carefully researched but 'definitely unauthorized,' [comes] from Leerhsen. . . . Based on interviews with those who knew Bourdain best, Leerhsen will contextualize Bourdain’s on-screen charisma and off-screen despair by revealing childhood traumas that shaped the man who was revered by some, feared by others and loved by all."
— BookPage