One Hundred Saturdays: Stella Levi and the Search for a Lost World (Hardcover) 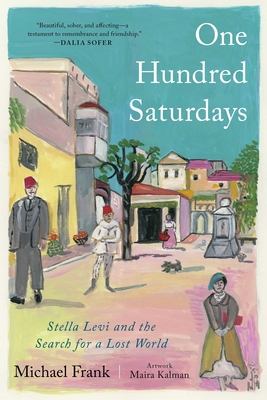 “Saturday after Saturday, Stella Levi’s story forms the lively, tragic tale that is One Hundred Saturdays. This is the best book I’ve read all year, and with Maira Kalman’s brilliant illustrations it may be the best book of the decade.”
— Angie Tally, The Country Bookshop, Southern Pines, NC

The remarkable story of ninety-nine-year-old Stella Levi whose conversations with the writer Michael Frank over the course of six years bring to life the vibrant world of Jewish Rhodes, the deportation to Auschwitz that extinguished ninety percent of her community, and the resilience and wisdom of the woman who lived to tell the tale.

With nearly a century of life behind her, Stella Levi had never before spoken in detail about her past. Then she met Michael Frank. He came to her Greenwich Village apartment one Saturday afternoon to ask her a question about the Juderia, the neighborhood in Rhodes where she’d grown up in a Jewish community that had thrived there for half a millennium.

Neither of them could know this was the first of one hundred Saturdays over the course of six years that they would spend in each other’s company. During these meetings Stella traveled back in time to conjure what it felt like to come of age on this luminous, legendary island in the eastern Aegean, which the Italians conquered in 1912, began governing as an official colonial possession in 1923, and continued to administer even after the Germans seized control in September 1943. The following July, the Germans rounded up all 1,700-plus residents of the Juderia and sent them first by boat and then by train to Auschwitz on what was the longest journey—measured by both time and distance—of any of the deportations. Ninety percent of them were murdered upon arrival.

Probing and courageous, candid and sly, Stella is a magical modern-day Scheherazade whose stories reveal what it was like to grow up in an extraordinary place in an extraordinary time—and to construct a life after that place has vanished. One Hundred Saturdays is a portrait of one of the last survivors drawn at nearly the last possible moment, as well as an account of a tender and transformative friendship that develops between storyteller and listener as they explore the fundamental mystery of what it means to collect, share, and interpret the deepest truths of a life deeply lived.

Michael Frank is the author of What Is Missing, a novel, and The Mighty Franks, a memoir, which was awarded the 2018 JQ Wingate Prize and was named one of the best books of the year by The Telegraph and The New Statesman. His essays, articles, and short stories have appeared in The New York Times, Los Angeles Times, The Atlantic, Slate, The Yale Review, Salmagundi, The TLS, Tablet, and other publications. The recipient of a 2020 Guggenheim Fellowship, he lives with his family in New York City and Camogli, Italy.

Maira Kalman is the author/illustrator of over thirty books for adults and children and a contributor to The New Yorker and The New York Times. She lives in New York City.

"Never underestimate the power of friendship at any stage in life. That’s one of the lessons from Michael Frank’s beautiful portrait of the wise and charming nonagenarian, Stella Levi, one of the last remaining Holocaust survivors from the vanished Sephardic community of the Juderia on the Greek island of Rhodes. In relaying her life story, Mr. Frank has pulled off something special: One Hundred Saturdays is a sobering yet heartening book about how friendship, remembrance, and being heard can help assuage profound dislocation and loss. It is also a reminder that the ability to listen thoughtfully is a rare and significant gift.” —Heller McAlpin, The Wall Street Journal

"Incandescent... Distilled through Frank’s intelligent prose and enlivened with eye-catching illustrations from [Maira] Kalman, Levi’s recollections bring to vivid life the unique culture of the Juderia, its complicated colonial history, and her colorful, multilingual family as she describes how, under Italian Fascist rule in the 1920s and ’30s, all traces of Judaism vanished from the public eye... Frank’s narrative shines with an ebullience, thanks to the 'unusually rich, textured, and evolving' life of his utterly enchanting muse. The result provides an essential, humanist look into a dark chapter of 20th-century history." —Publishers Weekly

"Reading [One Hundred Saturdays] is like watching an artist piece together a mosaic. A splash of blue sea here. A mother’s song over there. The smell of Purim pastries. The flash of first love... Maira Kalman’s illustrations, heavily influenced by Matisse with their deceptive simplicity, rich colors and delicate textures, are perfect complements to Levi’s story, portraying vanished scenes from life on Rhodes before the Holocaust. Together with the text of Frank’s beautiful book, they create a sensitive portrait of an extraordinary woman." —BookPage

"Gifted... Told from the author's point of view over the course of 100 meetings, each with its own short chapter, this story is a unique glimpse at a forgotten history that we all must learn." —Good Morning America (Most Anticipated September 2022)

"Frank (The Mighty Franks) provides a compelling and unique story of genocide and loss. The central figure, Stella Levi, is intensely captivating and a woman with remarkable insight... While memory is fallible after so long, the author always includes relevant historical context and research to fill in and fact-check Stella’s stories, but it’s done in a way that still honors her version. Illustrations by Kalman also bring this world to life. An essential read for Jewish history and memoir fans." —Library Journal (starred review)

“A poignant and absolutely necessary addition to the canon of Holocaust literature. Through Michael’s questions, which showcase trust and friendship that grows between interviewer and interviewee, and gorgeous illustrations from artist Maira Kalman, One Hundred Saturdays paints remarkable dual portraits. The first is of a vibrant Sephardic community which was decimated by the Nazis and is still often omitted from Holocaust histories. And the second is, of course, of Stella Levi and the chapters of her life: child, prisoner, survivor, wanderer, wife and mother and, now, storyteller.” —Hey Alma

“One Hundred Saturdays is, quite simply, essential reading.” —BookTrib

“This intimate story of one remarkable woman is also the history of a people. One Hundred Saturdays is an important book, brilliantly told and illustrated, and profoundly moving.” —Hilma Wolitzer, author of Today a Woman Went Mad in the Supermarket

“Stella Levi, now in her late nineties, is a reluctant Scheherazade. Michael Frank, her interlocutor, has a storyteller’s genius for listening. Theirs is a bond that transcends generations, languages, and lived experience. Together they have collaborated on a riveting portrait of a singular young woman who grew up in the old Jewish quarter of Rhodes, dreamed of a vibrant life in Europe, suffered deportation to a series of Nazi death camps, lost her family and her bearings, and made it to the other side. But Scheherazade told stories to survive. Stella Levi’s story illuminates the mysteries of survival.” —Judith Thurman, author of Cleopatra’s Nose

“Through the polyphonic story of Stella Levi, a woman severed from her origin but deeply connected to it through memory, Michael Frank conjures up not only the eradication of the Jewish community in Rhodes, but also what preceded it: the life. His book—beautiful, sober, and affecting—is a testament to remembrance and friendship.” —Dalia Sofer, author of The Septembers of Shiraz

“Like his subject, Stella Levi, Michael Frank is a master storyteller. He knows how to dole out information in a way that is nothing short of brilliant, and in One Hundred Saturdays he even manages to infuse the ghostly past with an air of lively, sympathetic suspense.”  —Wendy Lesser, author of Why I Read

“In One Hundred Saturdays Michael Frank entices readers to fall in love with Jewish Rhodes and its perspicacious bard, Stella Levi, a nonagenarian for whom he, too, seems to have fallen in the course of one hundred Saturdays of intimate, evocative, sometimes painful conversation. Maira Kalman's dreamy illustrations are the perfect companion to this moving book.” —Sarah Abrevaya Stein, author of Family Papers

"Michael Frank has beautifully preserved the lost world of the Jews of Rhodes. He manages to give us—deftly and with great economy—both Stella’s moving personal story and a vivid sense of the society that shaped her: a unique blend of Judeo-Spanish, Italian, French, Turkish, and Greek languages and cultures, an insular and yet cosmopolitan world that the Nazis effectively extinguished." —Alexander Stille, author of Excellent Cadavers: the Mafia and the Death of the First Italian Republic

"A stunning achievement—both as a momentous historic retrieval and a work of literary art. I was gripped throughout by this thoughtful, psychologically rich conversation." —Phillip Lopate, film critic and editor of The Art of the Personal Essay