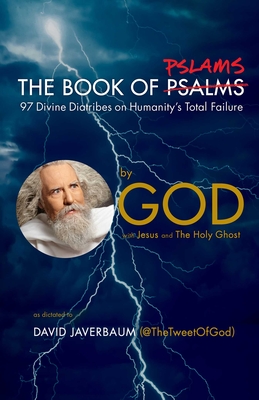 3,000 years ago, King David wrote The Book of Psalms—hymns in praise of God that became famous worldwide. Now, with humanity on the verge of a self-generated catastrophe, God (with the help of another David) has decided to return, and reverse, the favor.

God has collected a cornucopia of insults of the human race in the form of prose, poetry, and parody. From topics as diverse as COVID-19, Trump, racism, abortion, meth, math, and on a lighter note, the platypus, God provides a 21st-century spin on life’s many problems. And he’s not alone: his son Jesus Christ has contributed thirty sermons of his own, updating some of his Biblical teachings for the modern audience. Even the Holy Ghost stops by to make sure you don’t forget him. Anybody who’s a fan @TheTweetofGod and/or NOT a fan of the human race is sure to love The Book of Pslams.

God has been grabbing headlines ever since first creating the universe. Indeed, the multi-talented deity has been involved in the development of every single thing that has ever happened, including the Crusades, plate tectonics, and Seinfeld. His previous serious works as an author, The Old Testament, The New Testament, and The Koran, have sold an impressive 5 billion copies, with the first two in particular coming to be collectively regarded as something of a bible of their field.

David Javerbaum is a former head writer and executive producer of The Daily Show with Jon Stewart. He is the coauthor of that show’s bestsellers, America: The Book and Earth: The Book, and author of the pregnancy parody What to Expect When You’re Expected.

"Wickedly funny...Readers who haven't injured themselves laughing will be relieved to hear that doggie heaven is real, though it "doubles as mailman hell...No sacred cow goes untipped in this sidesplitting work."—PUBLISHERS WEEKLY

"Those familiar with God's Twitter, @TheTweet of God, know to expect the sacred but mostly the profane. Nothing is off the table... for those who finds truths twisted by sacrilege their cup of wine, well, bless you."—BOOKLIST

“Better than the Koran! I especially loved the nude picture of me on page 87!” — MUHAMMAD

“I stand corrected: God is back!”  — NIETZSCHE