My Travels with Mrs. Kennedy (Hardcover) 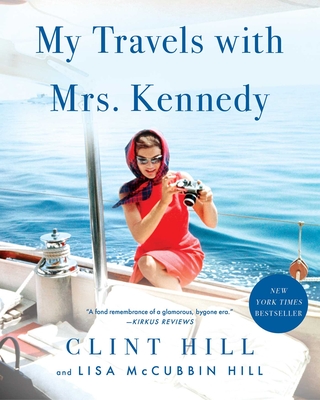 While preparing to sell his home in Alexandria, Virginia, retired Secret Service agent Clint Hill uncovers an old steamer trunk in the garage, triggering a floodgate of memories. As he and Lisa McCubbin, his coauthor on three previous books, pry it open for the first time in fifty years, they find forgotten photos, handwritten notes, personal gifts, and treasured mementos from the trips on which Hill accompanied First Lady Jacqueline Kennedy as her Secret Service agent—trips that took them from Paris to London, through India, Pakistan, Greece, Morocco, Mexico, South America, and “three glorious weeks on the Amalfi Coast.” During these journeys, Jacqueline Kennedy became one of her husband’s—and America’s—greatest assets; in Hill’s words and the opinion of many others, “one of the best ambassadors the United States has ever had.”

As each newfound treasure sparks long-suppressed memories, Hill provides new insight into the intensely private woman he always called “Mrs. Kennedy” and who always called him “Mr. Hill.” For the first time, he reveals the depth of the relationship that developed between them as they traveled around the globe. Now ninety years old, Hill recounts the tender moments, the private laughs, the wild adventures, and the deep affection he shared with one of the world’s most beautiful and iconic women—and these memories are brought vividly to life alongside more than two hundred rare photographs, many of them previously unpublished.

In addition to the humorous stories and intimate moments, Hill reveals startling details about how traveling helped them both heal during the excruciating weeks and months following the assassination of President John F. Kennedy in November 1963. He also writes of the year he spent protecting Mrs. Kennedy after the assassination, a time in his life he has always been reluctant to speak about.

My Travels with Mrs. Kennedy unveils a personal side of history that has never been told before and takes the reader on a breathtaking journey, experiencing what it was like for Clint Hill to travel with Jacqueline Kennedy as the entire world was falling in love with her.

Clint Hill is the New York Times bestselling author of Mrs. Kennedy and Me; Five Days in November; and Five Presidents: My Extraordinary Journey with Eisenhower, Kennedy, Johnson, Nixon, and Ford. A United States Secret Service Agent from 1958 to 1975, Clint Hill was assigned to First Lady Jacqueline Kennedy and was in the motorcade in Dallas on November 22, 1963, when President John F. Kennedy was assassinated. For his courage and swift actions that day, Hill received the nation’s highest civilian award for bravery. Starting out as a Special Agent, Clint Hill served as Agent in Charge of the First Lady Detail, the Vice Presidential Protective Division, the Presidential Protective Division, and when he was retired in 1975, he was Assistant Director responsible for all protective activity. Hill married coauthor Lisa McCubbin in 2021. Find out more at ClintHillSecretService.com.

Lisa McCubbin Hill is an award-winning journalist and New York Times bestselling author. She is the author of the acclaimed biography Betty Ford: First Lady Women’s Advocate, Survivor, Trailblazer and coauthor (with Clint Hill) of the New York Times bestsellers Mrs. Kennedy and Me; Five Days in November; and Five Presidents: My Extraordinary Journey with Eisenhower, Kennedy, Johnson, Nixon, and Ford. She met Clint Hill while writing her first book, The Kennedy Detail: JFK’s Secret Service Agents Break Their Silence (with Gerald Blaine). Previously, Lisa was a television news anchor, reporter, and talk-radio host. After September 11, she was a freelance writer in Saudi Arabia and Qatar. In 2021, Lisa McCubbin married coauthor Clint Hill. Visit her at LisaMcCubbin.com.

"Packed with rare images and fond reminiscences, this is a page-turning portrait of the Camelot era." —Publishers Weekly

“A fond remembrance of a glamorous, bygone era.” —Kirkus