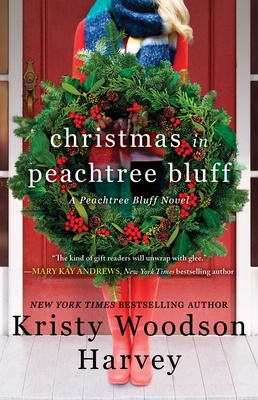 This is book number 4 in the The Peachtree Bluff Series series.

The newest installment of the New York Times bestselling Peachtree Bluff series follows three generations of Murphy women as they come together to face a hurricane that threatens their hometown—and the holiday season—in this “book equivalent of a warm and fuzzy pair of socks” (E! Online).

When the Murphy women are in trouble, they always know they can turn to their mother, Ansley. So when eldest daughter Caroline and her husband announce they are divorcing—and fifteen-year-old daughter Vivi acts out in response—Caroline, at her wits end, can’t think of anything to do besides leave her with Ansley in Peachtree Bluff for the holidays. After all, how much trouble can one teenager get into on a tiny island?

Quite a lot, as it turns out.

As the “storm of the century” heads toward Peachtree Bluff, Ansley and her husband, Jack, with Vivi in tow, are grateful they’re planning to leave for the trip of a lifetime. But Vivi’s recklessness forces the trio to shelter in place during the worst hurricane Peachtree has ever seen. With no power, no provisions, and the water rising, the circumstances become dire very quickly…and the Murphy sisters soon realize it’s up to them to conduct a rescue mission. With the bridges closed and no way to access Peachtree Bluff by land or air, they set sail on Caroline’s boat, The Starlite Sisters, determined to rebuild their beloved town—and their family.

In “pitch perfect tones” (Publishers Weekly) and written with her signature Southern charm, New York Times bestselling author Kristy Woodson Harvey explores the magic of Christmas, the power of forgiveness, and the importance of family in a tale that reminds us that, no matter the circumstances, home is always where we belong—especially during the holidays.

Praise for Christmas in Peachtree Bluff

"Not even the storm of the century and looming domestic troubles on the horizon can dim the lights of Kristy Woodson Harvey’s delightful Christmas in Peachtree Bluff. This, the fourth installment in her beloved Peachtree Bluff series, is as sweet as a candy cane, heartwarming as a cup of cocoa, and as endearing as the familiar sights and sounds of a small town Southern Christmas. It’s the kind of gift readers will unwrap with glee. I’m predicting reading and re-reading Christmas in Peachtree Bluff will quickly become a treasured holiday tradition."—Mary Kay Andrews, New York Times bestselling author of The Newcomer, Hello, Summer, and Sunset Beach

"Like authors Mary Kay Andrews and Mary Alice Monroe, Harvey offers what appears to be a simple beach read but expands to honor the forgiveness and hope possible with family and community support. She’s drawn likeable, realistic characters and placed them in the center of the kind of community in which the wrong coffee delivery leads to finding its rightful owner rather than a refund. Fans of the Peachtree Bluff trilogy will be happy to catch up with the Murphy sisters, and readers new to the Southern beach town and its residents will find themselves charmed and ready to find the earlier titles in the series."—Booklist

"Consider this the book equivalent of a warm and fuzzy pair of socks as readers get to spend the holiday season with the Murphy sisters in the fourth book in the beloved Peachtree Bluff series. We dare you not to wish you were a member of this family as you read about their attempts to come together to save their town as the storm of the century approaches."—E! Online

Praise for UNDER THE SOUTHERN SKY

"Harvey (Feels Like Falling) delivers a heart-wrenching tale of love and loss in this tearjerker...Harvey brings her characters to life, including Greer, whose heartbreaking journal entries imagine the family she and Parker would have. These passages are particularly wrenching, making the book’s happy ending all the more moving. Fans of women’s fiction will devour this.”—Publishers Weekly (starred review)

“Pack your beach bag, Harvey’s back with another delightful story of the magic of southern coastal towns…As with Mary Kay Andrews or Patti Callahan Henry, Harvey spins romance around well-drawn characters, complete with strengths and weaknesses, and always mindful of the beauty that comes from living in the modern South.”—Booklist

“Sometimes the key to new love lies hidden in old friendships. In Under the Southern Sky, Kristy Woodson Harvey stirs up a warm-hearted mix of hometown charm and the sort of thoroughly modern problems that bring us back to the people who know us best and the places that remind us of who we really are.”—Lisa Wingate, #1 New York Times bestselling author of Before We Were Yours and The Book of Lost Friends

“Perfect for: fans of beach reads, P.S. I Love You, and anything by authors Jennifer Weiner and Elin Hilderbrand. A perfect pick for book clubs or a weekend read, Under the Southern Sky follows journalist Amelia as she makes a heart-wrenching discovery that changes everything.”—Country Living

"Under the Southern Sky is more than sweet Southern fiction—it packs a punch and leads you in all sorts of unexpected directions...a gratifying story that is more than a beach read. It makes you think, ruminate and reminisce, all while being transported to quaint southern towns full of quirky characters. The book will appeal to fans of Jodi Picoult and Lisa Wingate, and will make you reconsider the fortifying bonds of family—those you’re born into and those you create.”—First for Women

"I've always been a Kristy Woodson Harvey fan, but she has taken things to a whole new level with Under the Southern Sky, her best novel yet. I laughed, sobbed, and gasped at the story's clever twists and turns; I couldn't flip the pages fast enough to see how Amelia's and Parker's story turned out. You'll need plenty of tissues—and maybe some of Cape Carolina's beloved bourbon-spiked sweet tea—to make it to the end. Deliciously plotted, intricately constructed, gorgeously written, and brimming with hope, Under the Southern Sky will steal your heart and make you think about first loves, second chances, and the unforeseeable twists of fate that guide us all."—Kristin Harmel, New York Times bestselling author of The Book of Lost Names

"Harvey delivers a fresh and unforgettable portrait of modern parenthood and the thoroughly traditional ways that love continues to conquer all."—Booktrib