American Made: What Happens to People When Work Disappears (Hardcover) 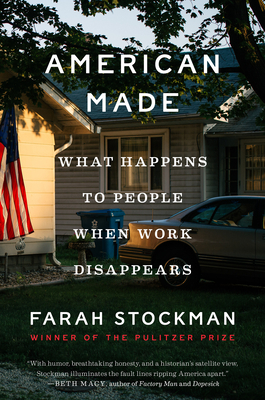 What happens when Americans lose their jobs?  In American Made, an illuminating story of ruin and reinvention, Pulitzer Prize-winning journalist Farah Stockman gives an up-close look at the profound role work plays in our sense of identity and belonging, as she follows three workers whose lives unravel when the factory they have dedicated so much to closes down.

Shannon, Wally, and John built their lives around their place of work. Shannon, a white single mother, became the first woman to run the dangerous furnaces at the Rexnord manufacturing plant in Indianapolis, Indiana, and was proud of producing one of the world’s top brands of steel bearings. Wally, a black man known for his initiative and kindness, was promoted to chairman of efficiency, one of the most coveted posts on the factory floor, and dreamed of starting his own barbecue business one day. John, a white machine operator, came from a multigenerational union family and clashed with a work environment that was increasingly hostile to organized labor.

The Rexnord factory had served as one of the economic engines for the surrounding community. When it closed, hundreds of people lost their jobs. What had life been like for Shannon, Wally, and John, before the plant shut down? And what became of them after the jobs moved to Mexico and Texas?

American Made is the story of a community struggling to reinvent itself. It is also a story about race, class, and American values, and how jobs serve as a bedrock of people’s lives and drive powerful social justice movements. This revealing book shines a light on a crucial political moment, when joblessness and anxiety about the future of work have made themselves heard at a national level. Most of all, American Made is a story about people: who we consider to be one of us and how the dignity of work lies at the heart of who we are.

Farah Stockman joined the New York Times editorial board in 2020 after covering politics, social movements, and race for the national desk. She previously spent sixteen years at the Boston Globe, nearly half of that time as the paper’s foreign policy reporter in Washington, D.C. She has reported from Afghanistan, Pakistan, Iran, South Sudan, Rwanda, and Guantánamo Bay. She also served as a columnist and an editorial board member at the Globe. In 2016, she won the Pulitzer Prize for a series of columns about the efforts to desegregate Boston’s schools. She lives in Cambridge, Massachusetts, but also spends time in Michigan.

“At last, an elegy for the working class that doesn’t skate on limpid stereotypes about laziness or lack of thrift. Farah Stockman did not just parachute into the lives of displaced steelworkers in Indiana for her debut narrative masterpiece. She stayed, and then stayed some more. American Made is the story of how the rich screwed the working class while the rest of us yawned from our cushy bubbles.”—Beth Macy, author of Factory Man and Dopesick

“A gripping portrait of the human costs incurred when industries decline . . . American Made plots each worker’s often turbulent history in vivid detail. . . . The result is a book with a unified tone, one that places the reader in the homes of the workers as they struggle to survive.”—The New York Times Book Review

“A serious and thoughtful look at what happens to people when they lose their jobs . . . The stories are empathetic and honest, and they touch on race, class, and politics, as well as work, purpose, stability, dignity, and a host of other human emotions and beliefs that are all wrapped up in how we live, how safe and secure we feel, and what we gain or lose from the way we work.”—Charlie Baker, governor of Massachusetts

“Farah Stockman’s respect for hardworking people is why they have given her access to their world, with all of its defeats and conquests. Her thoughtfulness as a writer is why we’re invited into their hearts, where dreams still simmer. To read American Made is to understand the strength and courage it takes to forge a life in a world that too many want to pretend does not exist. . . . An extraordinary tribute to the rest of America.”—Connie Schultz, author of . . . And His Lovely Wife and The Daughters of Erietown

“A vivid and empathetic examination of ‘what jobs mean to people’. . . an intimate and captivating study of the forces dividing America.”—Publishers Weekly (starred review)

“A well-crafted nonpartisan study of the American working class that is a desirable addition to any nonfiction collection and will find a wide audience.”—Library Journal, (starred review)