The Spy and the Traitor: The Greatest Espionage Story of the Cold War (Large Print / Paperback) 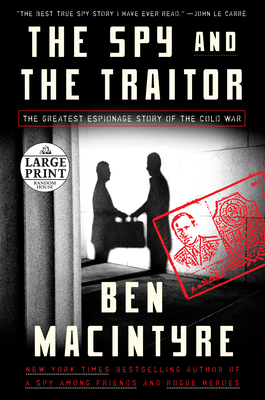 NEW YORK TIMES BESTSELLER • The celebrated author of Double Cross and Rogue Heroes returns with his greatest spy story yet, a thrilling Americans-era tale of Oleg Gordievsky, the Russian whose secret work helped hasten the end of the Cold War.

“The best true spy story I have ever read.”—JOHN LE CARRÉ

If anyone could be considered a Russian counterpart to the infamous British double-agent Kim Philby, it was Oleg Gordievsky. The son of two KGB agents and the product of the best Soviet institutions, the savvy, sophisticated Gordievsky grew to see his nation's communism as both criminal and philistine. He took his first posting for Russian intelligence in 1968 and eventually became the Soviet Union's top man in London, but from 1973 on he was secretly working for MI6. For nearly a decade, as the Cold War reached its twilight, Gordievsky helped the West turn the tables on the KGB, exposing Russian spies and helping to foil countless intelligence plots, as the Soviet leadership grew increasingly paranoid at the United States's nuclear first-strike capabilities and brought the world closer to the brink of war. Desperate to keep the circle of trust close, MI6 never revealed Gordievsky's name to its counterparts in the CIA, which in turn grew obsessed with figuring out the identity of Britain's obviously top-level source. Their obsession ultimately doomed Gordievsky: the CIA officer assigned to identify him was none other than Aldrich Ames, the man who would become infamous for secretly spying for the Soviets.

Unfolding the delicious three-way gamesmanship between America, Britain, and the Soviet Union, and culminating in the gripping cinematic beat-by-beat of Gordievsky's nail-biting escape from Moscow in 1985, Ben Macintyre's latest may be his best yet. Like the greatest novels of John le Carré, it brings readers deep into a world of treachery and betrayal, where the lines bleed between the personal and the professional, and one man's hatred of communism had the power to change the future of nations.

Ben Macintyre is a writer-at-large for The Times of London and the bestselling author of A Spy Among Friends, Double Cross, Operation Mincemeat, Agent Zigzag, and Rogue Heroes, among other books. Macintyre has also written and presented BBC documentaries of his work.

“Every bit as exciting as my favorite spy novels.”—Bill Gates, GatesNotes

“Readers seeking a page-turning spy story, look no further. The author of A Spy Among Friends and Agent Zigzag, among others, does it again, this time delivering a Cold War espionage story for the ages… another can’t miss account of intrigue and intelligence.” —Boston Globe

“The subtitle of Macintyre’s latest real-life spy thriller calls it ‘The Greatest Espionage Story of the Cold War.’ Like pretty much everything in this fine book, the description is accurate… Macintyre is fastidious about tradecraft details… [he] has become the preeminent popular chronicler of British intelligence history because he understands the essence of the business.” —Washington Post

“The Spy and the Traitor [is] a fast-paced and fascinating biography of Russian-spy-turned-British-asset Oleg Gordievsky… It’s nonfiction, but it reads like the best of thrillers… The toll spying takes on Gordievsky’s personal life is enthralling, and the details of how deep the effects of one KGB agent’s deception can go are, in these days of Russian election meddling, quite frightening.” —San Francisco Chronicle

“Who was the most important spy of the Cold War era? Ben Macintyre convincingly nominates Oleg Gordievsky… Readers should rejoice in a very readable book by a skilled story-teller. Although an intelligence outsider, Mr. Macintyre enjoys the trust of MI6… Mr. Macintyre’s account of how the officer known as Bromhead recruited Mr. Gordievsky as a spy is a textbook study of intelligence reality; indeed, these pages alone are worth the price of the book… In terms of suspense, the flight through Russia is of thriller-quality.” —Washington Times

“Oleg Gordievsky was the most significant British agent of the cold war… The result is a dazzling non-fiction thriller and an intimate portrait of high-stakes espionage.” —The Guardian

“Even a reader not enamored of spy stories will have trouble putting this one down… [The story] unfolds with a pace and drama that recall the novels of John le Carré.” —Foreign Affairs

“[A] swift-moving tale of true espionage in the most desperate years of the Cold War... The closing pages of Macintyre’s fluent yarn find Gordievsky attempting to escape captivity and flee to the West in a scenario worthy of John le Carré... Oddly timely, given the return of Russian spying to the front pages, and a first-rate study of the mechanics and psychology of espionage.” —Kirkus Reviews (starred review)

“[A] captivating espionage tale... In a feat of real authorial dexterity, Macintyre accurately portrays the long-game banality of spycraft—the lead time and persistence in planning—with such clarity and propulsive verve that the book often feels like a thriller. The book has a startling relevancy to the news of the day... Macintyre has produced a timely and insightful page-turner.” —Publishers Weekly (starred review)

“Pick up any current true-crime spy book and you’ll probably see a version of this phrase on the cover: ‘The Greatest Spy Story Ever Told.’ Most of them don’t live up to the billing, but the latest by Ben Macintyre comes close…What makes this read propulsive is the way Macintyre tells the story almost as a character-driven novel… Macintyre’s way with details, as when he explains exactly how the KGB bugged apartments, or when he delves into KGB training, is utterly absorbing. The action is punctuated with plenty of heart-stopping near-discoveries, betrayals, and escapes. Fascinating, especially now.” —Booklist (starred review)