Seek and Hide: The Tangled History of the Right to Privacy (Hardcover) 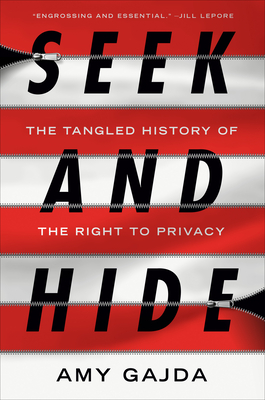 “Gajda’s chronicle reveals an enduring tension between principles of free speech and respect for individuals’ private lives. …just the sort of road map we could use right now.”—The Atlantic

“Wry and fascinating…Gajda is a nimble storyteller [and] an insightful guide to a rich and textured history that gets easily caricatured, especially when a culture war is raging.”—The New York Times

An urgent book for today's privacy wars, and essential reading on how the courts have--for centuries--often protected privileged men's rights at the cost of everyone else's.

Should everyone have privacy in their personal lives? Can privacy exist in a public place? Is there a right to be left alone even in the United States? You may be startled to realize that the original framers were sensitive to the importance of   privacy interests relating to sexuality and intimate life, but mostly just for powerful and privileged (and usually white) men.


The battle between an individual’s right to privacy and the public’s right to know has been fought for centuries. The founders demanded privacy for all the wrong press-quashing reasons. Supreme Court jus­tice Louis Brandeis famously promoted First Amend­ment freedoms but argued strongly for privacy too; and presidents from Thomas Jefferson through Don­ald Trump confidently hid behind privacy despite intense public interest in their lives.

Today privacy seems simultaneously under siege and surging. And that’s doubly dangerous, as legal expert Amy Gajda argues. Too little privacy leaves ordinary people vulnerable to those who deal in and publish soul-crushing secrets. Too much means the famous and infamous can cloak themselves in secrecy and dodge accountability. Seek and Hide carries us from the very start, when privacy concepts first entered American law and society, to now, when the law al­lows a Silicon Valley titan to destroy a media site like Gawker out of spite. Muckraker Upton Sinclair, like Nellie Bly before him, pushed the envelope of privacy and propriety and then became a privacy advocate when journalists used the same techniques against him.  By the early 2000s we were on our way to today’s full-blown crisis in the digital age, worrying that smartphones, webcams, basement publishers, and the forever internet had erased the right to privacy completely.

Amy Gajda is the Class of 1937 Professor of Law at Tulane Law School, a former jour­nalist, and one of the country’s top experts on privacy and the media. She was an award-winning legal commentator on Illinois public radio stations and has written for The New York Times and Slate and provided expert commentary for The New Yorker, The Guardian, Newsweek, the Los Angeles Times, the Associated Press, as well as C-SPAN, CBS Mornings, and many more. She lives in New Orleans.

“Wry and fascinating…Gajda is a nimble storyteller [and] an insightful guide to a rich and textured history that gets easily caricatured, especially when a culture war is raging.”—The New York Times

“Gajda’s chronicle reveals an enduring tension between principles of free speech and respect for individuals’ private lives. But it also throws into sharp relief how much the context for that debate has changed in the past several decades…just the sort of road map we could use right now.”—The Atlantic

“This brilliant and thought-provoking book shows how America’s well-known emphasis on freedom of the press has long been balanced by a deep legal tradition that protects an individual’s right to privacy. With fascinat­ing case studies, Amy Gajda shows how battles over the right to privacy are nothing new, but they are particularly relevant in this era of digital media and social networks.”—WALTER ISAACSON, author of Steve Jobs

“The history of privacy is much more than a matter for the courts: it is, as Amy Gajda shows, an unsettling, emotionally wrought factor in American life that never goes away. These days, when news organizations can, under the First Amendment, pursue rumors and squeeze personal information from public figures, freedom of the press and personal dignity clash. With an abundance of sharply drawn examples, Gajda shines a needed spotlight on an uneasy inheritance. A tangled history, indeed.”—NANCY ISENBERG, author of White Trash

“For anyone who mistakenly believes that the debate about press freedom and privacy is a twenty-first-century problem, Amy Gajda’s Seek and Hide is a reminder that ‘gotcha’ journalism, political sex scandals, and hand-wringing over new technologies date back to the Founding Era. In this gorgeously written, rollicking account of a very complicated, very Ameri­can history of the smackdown between privacy versus the right to know, Gajda offers indispensable and timely context for contemporary debates about the boundaries of both. Ultimately Seek and Hide also serves as a bracing reminder that the laws of privacy and politics are often shaped by self-interested parties with the most to gain and the most to hide.”—DAHLIA LITHWICK, senior legal correspondent, Slate

“An engrossing and essential account of the origins of our present dilemma.”—JILL LEPORE, author of These Truths

“A magnificent book that shows us that the tension between the right to privacy and freedom of expres­sion is as old as this country yet as recent as social media and doorbell cameras. At a time when we all must be concerned about what it all means for each of us, Amy Gajda has written the definitive book about privacy and the right to know.”—ERWIN CHEMERINSKY, dean and Jesse H. Choper Distinguished Professor of Law, University of California, Berkeley School of Law